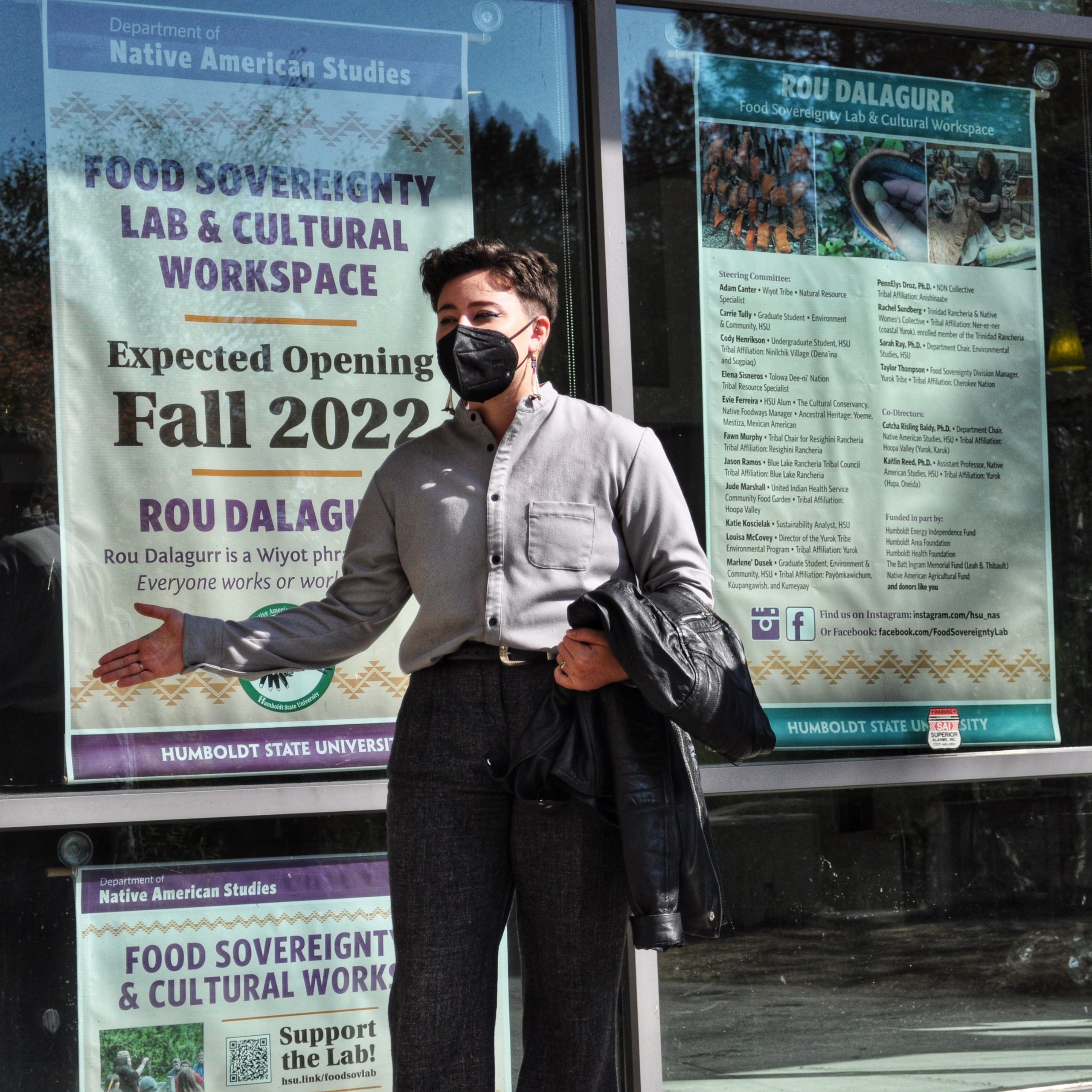 We took a tour of the Native American Forum lobby and a walking tour of the outdoor classroom space, located in the Wiyot Plaza on the Cal Poly Humboldt campus, as well as viewed the Indigenous Gardens and the in-progress Rou Dalagurr Food Sovereignty Lab & Cultural Workshop Space.

Prior to the walk, we had a chance to hear about the Native-focused programs at Cal Poly Humboldt, like the Department of Native American Studies, the Indian Natural Resources, Science & Engineering Program + Diversity in STEM (INRSEP+), and the Indian Tribal & Educational Personnel Program work toward climate resilience and related workforce and career pathway development. The partnerships of these programs alongside local community members have been instrumental in assisting students in facing barriers on campus, including pushing for a change in state and campus fire burning policies and petitioning the University Space and Facilities Advisory Committee, which denied the original request put forth by students to build the Food Sovereignty Lab. The Native American Studies program is almost 30 years old, and it– along with INRSEP+, a program started in 1972 by the Native American Career Education in Natural Resources department– was developed as a way to support Native American students in the natural resources and science fields as well as any other major.

With the recent funding to transition into a polytechnic university, our speakers also shared the University’s plans to design a Masters in Community and Energy program, which offers a blending of tribal science, deeply rooted in regional teachings, and western forms of science and engineering.

During the tour, we talked about the work to bridge campus and community and heard the story of the creation of the Food Sovereignty Lab and Rou Dalagurr Food Sovereignty Lab & Traditional Ecological Knowledges Institute. The Food Sovereignty Lab was designed by and advocated for by students who conducted interviews to understand and outline what students and community members would desire from a learning and community space. The space includes a commercial kitchen, tables, and lab equipment, with an additional fire and smoking pit as well as a gathering area outside. The Lab will soon enter a second phase of development, which will feature expansion of the outdoor space and provide additional accessibility accommodations. The project was made possible through student fundraising and the investment of over 500 donors. Graduate student Marlene Dusek described the space as a “living laboratory” as we stopped by the regalia making area and salmon traditional cooking pit near the redwood forest, emphasizing that the space offers a way to reconnect with traditional sciences and the land.